REVIEW: The Way We Fall by Megan Crewe 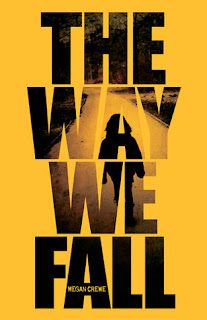 Summary (Goodreads)
"It starts with an itch you just can't shake. Then comes a fever and a tickle in your throat. A few days later, you'll be blabbing your secrets and chatting with strangers like they’re old friends. Three more, and the paranoid hallucinations kick in. And then you're dead."

When a deadly virus begins to sweep through sixteen-year-old Kaelyn’s community, the government quarantines her island—no one can leave, and no one can come back. Those still healthy must fight for dwindling supplies, or lose all chance of survival.

As everything familiar comes crashing down, Kaelyn joins forces with a former rival and discovers a new love in the midst of heartbreak. When the virus starts to rob her of friends and family, she clings to the belief that there must be a way to save the people she holds dearest. Because how will she go on if there isn't?

Ever since I first learnt about Black Death in primary school (pretty sure I didn't sleep for a week!) I have been both terrified and morbidly fascinated by the idea of deadly pandemics. It's hard to imagine anything more horrible than watching your loved ones being picked off by a silent, invisible killer, never knowing when or whether it would finally sink its claws into you. And worst of all it could strike at any second, as the unsuspecting Kaelyn and the rest of her small island community soon find out.

First of all, I love Kaelyn. When we meet her at the beginning of the book she is quiet and socially awkward. She is far more comfortable in the company of animals than her peers, but doing her best to face her fears and make some more friends. Little does she know that she will soon have bigger challenges to contend with than inviting a classmate to sit next to her, but when the time comes she definitely rises to the occasion. She develops a great deal through the course of the book and was, to me, a very likeable and relateable protagonist.

The story is told through a diary which Kaelyn writes for Leo, an old friend of hers who left to study on the mainland. Events start out quite slow, but I was definitely never bored. There is a gradual build-up of dread as the virus affects its first victim, and then the second, before quickly beginning to snowball out of control. Events are almost entirely constrained to the quarantined island with little insight as to what is going on in the rest of the world, which reflects the claustrophobia and isolation its inhabitants feel.

Naturally there is a love interest for Kaelyn, and whilst it didn't blow me away I did think that their relationship was very sweet and believable. I definitely gave a little internal cheer when they finally kissed! I was even more impressed with the emerging friendship between Kaelyn and Tessa, whom she originally thinks to be aloof and boring.

I would definitely recommend The Way We Fall to any fans of dystopian and apocalyptic fiction. There are many likeable and well-developed characters, and it is interesting to see their relationships are affected by the circumstances they face. I will definitely be reading the sequel, The Lives We Lost, as soon as I can get my hands on it and am looking forward to finding out how things are faring for Leo, Kaelyn's brother Drew, and everyone else outside of the island.