REVIEW: The Ropemaker by Peter Dickinson

When I was little my favourite film was E.T. I loved it so much that at one point I insisted on watching it every single day. Needless to say, my family were soon sick of it, but apparently I was a difficult child to bore. I never got tired of watching that movie and a while later, when I learned to read, I was exactly the same with books.

Whenever my current stack of library loans was exhausted, out would come the favourites. Harry Potter, The Hobbit and His Dark Materials were all very well-thumbed. I could never get tired of diving back into those worlds, drinking up the details I might have missed before and greeting the characters like old friends. And I'm definitely not alone in that! But there are some books which, whilst they're absolute classics in my eyes, don't seem to get quite the attention they deserve out in the wide world.

so, to finally reach the point of this rambling introduction, I decided to revisit and review one of my childhood treasures: The Ropemaker by Peter Dickinson. 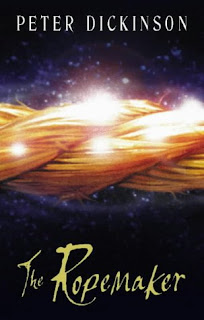 Synopsis (Goodreads)
The magic in the Valley is dying.
In the forest, the cedar trees whisper the news. The age-old spell can no longer protect the land from its enemies.
Four companions must find the sorcerer who conjured the ancient power. He has not been seen for centuries, hidden in the dark heart of an evil Empire. Their journey is desperately dangerous, and the travellers are shadowed by a mysterious figure. Is the shape-changing Ropemaker their ally? Or a deadly enemy? And does he command the deepest magic of all? That weaves and unweaves the great rope that is time itself...

Review
Our heroine, Tilja, lives in a small community isolated from the rest of the world by impassable mountains and a forest which strikes down all men who enter with a mysterious sickness. This is a miraculous boon for the people of the valley, as it allows them to live in peace, protected the cruel empire which lies beyond. However, as we enter the story the legendary magic of the forest is failing and danger looms. To save the valley, Tilja and her companions (a boy called Tahl and interestingly, their grandmother and grandfather respectively) must venture beyond it, in search of the magician who cast the original spell of protection. The hunt takes them into a tyrannical realm where magic is real but strictly regulated, and you cannot even die special without permission from the emperor.

Though The Ropemaker takes place in a fantasy world, the focus is very much on the characters rather than the backdrop (although this doesn't mean the setting isn't both well thought out and compelling- it is!). I fell in love with nearly everyone in this book, especially the grandparents, Meena and Alnor. Having two elderly characters playing such an active role in a YA novel is so refreshing. And then there is Calico. She may just be a pony, but with her cantankerous personality she as memorable as any of her human companions (And I'm a real sucker for books which treat animals as significant, rather than background props).

I must have journeyed with Tilja and co. at least 10 or so times over the years, so I feel qualified enough to recommend this book unreservedly. It's original and highly readable, whether you are exploring the twists and turns for the first time or gleefully anticipating them.